Sermon ‘For The Glory Of God Alone’ (Psalm 115) by Chris Jolliffe is available in audio and video: http://bit.ly/2yZNtns

As I write to you now, I hear a mob at my door

An army of people calling, I can’t ignore

They want silence. They want me gone, William;

A pack packed with pitchforks and torches and clubs

Angry at truth, and calling for blood.

I came to Geneva, after your relentless pursuit

To preach the gospel of Christ, and Christ alone.

But against your prediction, and depiction of this city, I’ve felt nothing but friction against the good news I bring, and now here I am threatened with eviction. 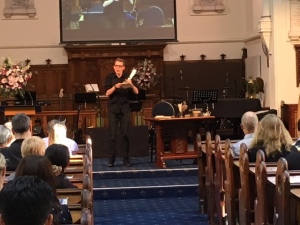 For once in the past, an intervention divine,

when God subdued and made a teachable heart of mine

I saw in that moment all power and glory

The majesty of God revealed in the story

Of God and his people, in scripture complete

revelation of who he is and how to know him

Man creates a model of God, in one single plane

That is put in a containable box and constrained

To our weak definition, a flawed exposition

END_OF_DOCUMENT_TOKEN_TO_BE_REPLACED

October 2017 is the 500th Anniversary of the start of the Protestant Reformation.

What is the Reformation?

Back in the 1400s people began to study in a new way. Universities were developing and there was a spirit of enquiry and questioning. It was the period we know as the Renaissance, which means ‘new birth’. A new age was dawning.

People (especially across Europe) began to question. Instead of merely reading what previous writers had said there was a great desire to go back to the sources, to the original documents. People were fascinated by the Greco-Roman empire and philosophers such as Plato and Aristotle and Socrates and Seneca and so on. Scholars translated the secular original texts and studied them in detail, and along with the philosophers they also began to study the biblical texts in the same way.

Now at this point in history, the late 1400s, early 1500s nobody read the Bible. The church told people what to believe and how to ensure their salvation. Many priests and monks had never read the scriptures. Some, like Ulrich Zwingli from Zurich were scared to even open the pages. Martin Luther (who would become a great German reformer) had studied to become a monk and a priest but did not even look at a Bible until he was 20 years of age.

Now Martin Luther was incensed that the church taxed people, fined and oppressed them and then offered salvation through good works. He began to speak out. He read in the Bible in the letter to the Romans that salvation is through faith alone, not through doing what the church told you and going through their practices and rituals.

He saw that faith in Jesus Christ is what is necessary for salvation. He wanted everyone to be able to read the scriptures just as he did so he translated the Bible into German. He no longer thought that you had to believe in what the church told you, if you wanted to know about the Christian faith then you only need to read the Bible, scripture alone.

During the 1520s Luther spoke out and people listened. A major upheaval began. People realised as they read the Bible that they did not have to pray to Mary, that statues of saints were of no value and that transubstantiation –  the idea that in the ritual of the communion mass the bread and wine becomes the actual body and blood of Christ –  had no scriptural foundation.

In Zurich at around the same time Ulrich Zwingli was coming to the same conclusions. The city took a vote to either follow the traditional thinking or to embrace the ‘new’ ideas. They chose the new way. Zwingli was appointed as priest of the cathedral and began preaching the New Testament to the people.

Across Europe the old ties with the Roman Catholic Church were being broken and people embraced the newly discovered, or recovered message of the scriptures.

They began to understand that it was by God’s grace alone, and not through any earned merit, that salvation was offered. And how does this come about? It comes about through Jesus Christ when God sent his son to take away our sins. It is by Christ alone that we can be saved. This is not what the church was teaching.

And they also learnt why this is so. It is for God’s glory, not for the church or the arch-bishops or the pope.  God did this for his glory alone. They called on the Church to reform.

And so, reform swept through the church and new churches and denominations were formed and more and more people were taught the biblical truths. They recognised that there were five key doctrinal points that were at the basis of the reform. Today we call them the five solas, using the Latin word for alone or only.

Sola Fide (“faith alone”): We are saved through faith alone in Jesus Christ.

Sola Gratia (“grace alone”): We are saved by the grace of God alone.

What does the Reformation mean for us today?

Five hundred years later it means the same as it did for those reformers. Through their reclaiming of the truths that are found in scripture we know that our salvation is secure. We know that Jesus has made that one true, perfect sacrifice for our sins. We know that the Bible is the record of God’s revelation of himself in Jesus Christ. And we know that we live for his glory.

Glenn Clarke gives a very quick summary of what the Protestant Reformation was all about – you can view that here followed by a sermon by Paul Harrington on ‘Christ Alone’ (Psalm 45 & Hebrews 9:23-28) by Paul Harrington – available in audio and video: http://bit.ly/2ylc4W2