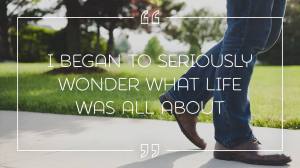 How did the axe-murder of the lady across the road lead Chris to become a Christian?

‘I grew up in a comfortable part of Sydney where nothing ever went wrong. But then came the night when the man across the road axe-murdered his wife before running outside, only to die of a heart attack. Not long after that, my next door neighbours were kidnapped by thieves, and had such a terrifying experience that they sold their house and moved away. Soon after that, the lady down the street blew her brains out, leaving her husband and four kids behind. All this happened in a safe place where bad things weren’t meant to happen! My assumption about life—get a good education, so you can get a good job, so you can live in a place like ours where nothing ever went wrong—was totally blown apart. I began to seriously wonder what life was all about.

‘Around this time I was invited to a youth group at the local Anglican church. I went along because I was searching (and also because girls were there). But when I arrived, I was staggered that the people were so loving towards each other, but more so, to me! Why? My parents loved me, but they had to (they were family!). This was enormously compelling. I didn’t understand where this love came from, but it kept me going back.

‘After a few years, I finally understood. God loved me so much that he sent his Son to the cross so that I wouldn’t have to be punished for the wrong I knew I’d done, and could instead be forgiven. This was the answer. It explained why the people at church loved one another. It explained what life was all about. So I had no choice but to become a Christian. Why?

‘First, because it would have been the height of rudeness not to. My parents had always taught me to say “thank you” when someone did something for me. No one had ever done as much for me as God had in sending his Son! “For God so loved the world that he gave his only Son, that whoever believes in him shall not perish but have eternal life” – John 3:16. It would have been the height of rudeness to walk away from that without saying “thank you”!

‘Second, why would I walk away, when the alternative was hell? If I rejected Christ, I’d be choosing to say “no” to eternal life, and to pay the price for my sins myself! So there really was no choice—I said “thank you”, accepted Christ and became a Christian. That was 30 years ago now, and I have never looked back. I continue to be staggered that God loves (even) me so completely and sufficiently.’