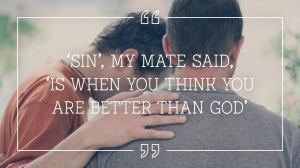 ‘I came to Christ kicking and screaming! Well, I put up a fight.

‘By the time I was 20 I had been told what “sin” was numerous times, but I hadn’t yet realised I was guilty of it!

‘“I don’t think that”, I quickly replied. To which my wise friend said, “What evidence in your life shows that you think God is better than you? You seem to live first for yourself, then for the world, and I struggle to see which part of your life puts God first!”

‘I became a Christian because a very patient friend was bold enough to tell me about Jesus and explain to me that Jesus did for me what I could never do for myself—make me right with God.

‘He took me to 1 Peter 3:18 (in fact, I am sure he took many of his friends to this verse) and showed me that “Christ died for sins, once for all, the righteous for the unrighteous, to bring you to God.”

‘Four things struck me. Jesus was willing to do for me what I was not willing to do for him. He did it once and that was sufficient for all. He was right before God (that is, righteous), a claim that I knew I honestly could not say about myself. And that, for some reason, he did it so that I could go with him before God.

‘My mate said, “You’ve done enough, how about you let Jesus do the rest!”—and with that he asked me to pray with him. I can’t remember exactly how it went, but it was something like this: “Father, Ken has stuffed up, but you already know that. He now knows that, and he is really sorry. Please take him back by the blood of Jesus and help him from now on to live for you rather than himself. Amen.”

‘I wish I could say that at that moment the heavens opened and the choir of angels suddenly became deafening, that my heart instantly became pure and from that point I never sinned again, but that would be a lie. God graciously put several other faithful and patient friends in my life who, over time, talked to me about Jesus. At some point, by God’s grace, I “stopped unbelieving and believed” (John 20:27).

‘I am so humbled that Jesus is my Lord and God.’